It is the 1st of November - Halloween in Las Palmas. Hot as usual, but getting even hotter seeing we are getting ready to leave the marina and start the long awaited second leg of the Mini Transat 2017.! For each skipper it's a huge mix of emotions - some are giggling, some are laughing, some are staring.. I am playing cool, I think I am ready for the big jump, but am I really? As soon as Eloa and I leave the dock, I feel my legs shaking, my heart rushing and my cheeks blushing - this is it, we are sailing across the great blue ocean - solo yet not alone! 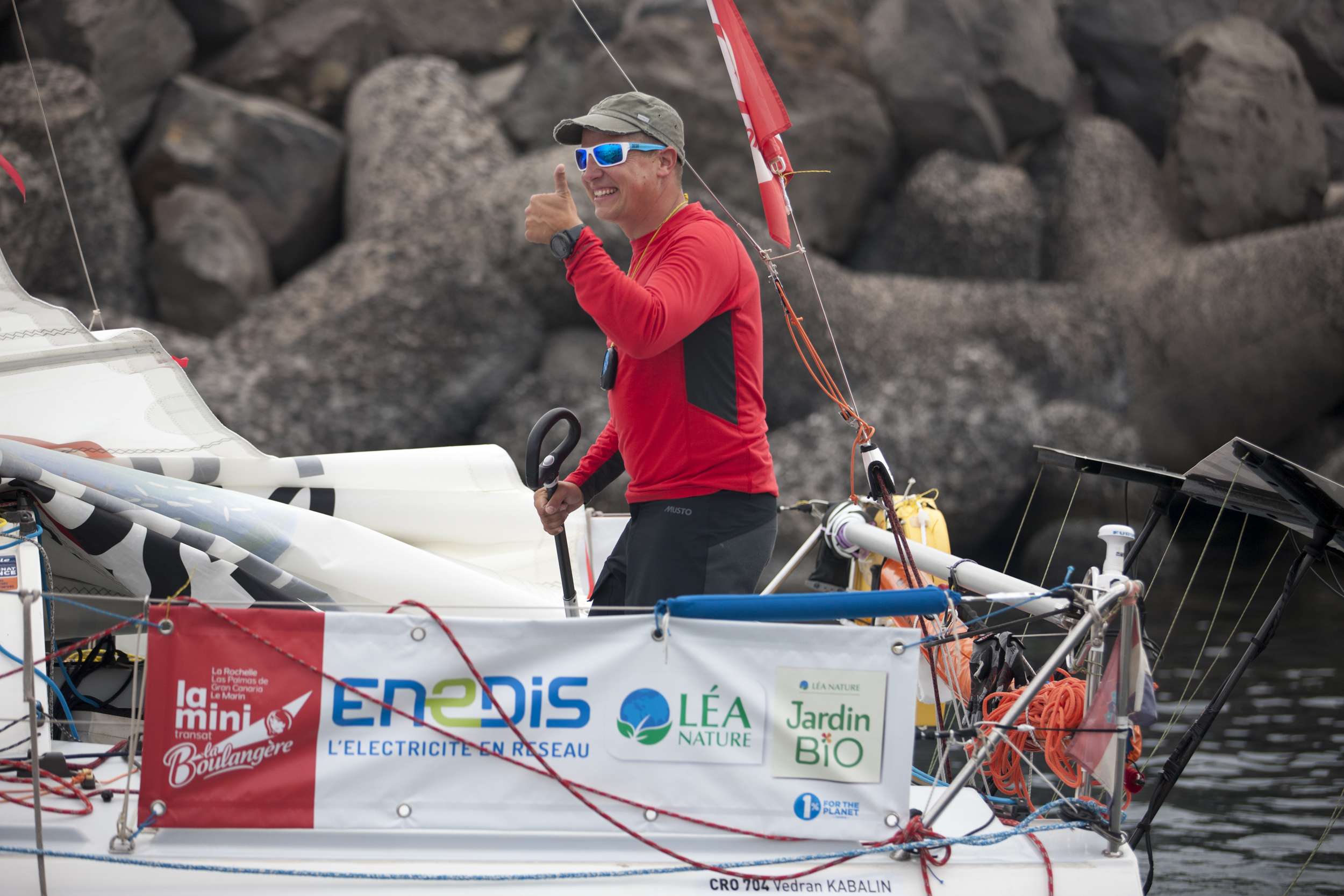 After a 20 days rest in the Canaries, it's finally time to start sailing again. Eloa is ready, I feel confident. The night before the start I had my last conversation with Davor, my psychologist. We agreed that this race, as all the others before, is just a sort of a preparation for the next one - it's a never ending story, a big cycle.. The weather should be nice for the first week, the trade winds are not that strong, but there is a 10% possibility of a hurricane developing on our route, so the organizing committee sends us to the south through the Cape Verde islands. This route is slightly longer, but definitely safer - you don't want to have 80 six and a half meter boats spread all over the Atlantic in hurricane force winds. So, Wednesday, 1st of November, 13.00 o'clock - we're off.

It's nice to see so many sails behind us, it means we started well. But immediately I notice that all the other boats are slightly faster. I don't mind, I am still not a 100% in the race and I'm enjoying myself. But day after day, the lack of speed becomes more and more frustrating. It's not that I didn't try everything to speed up the boat, it seems that we are just a tiny bit slower. OK, I say to myself, we are going to stop listening to the rankings on the SSB until Cape Verde, that way we can focus on sailing fast. And so it was, although I made some stupid tactical decisions, I am catching a small group ahead. But at 150 miles from Cape Verde, the fuel cell is overheating and I am getting little or no energy through the night. Than the port rudder housing screw broke, and the rudder started its dance. I try to improvise something, but it is getting clear that we are going to have to stop in Mindelo on Sao Vincente island. Later I realized that Transat is, amongst a million other things, adapting to different situations. Because it is impossible to have a perfect 4.000 miles race - the problems are inevitable. But life on board, despite all the difficulties, is mesmerizing. The sleep cycles, the thing I was most afraid of, became natural. I sleep twenty minutes to half an hour 10 times a day, and I get one longer sleep - 45 minutes to one hour - in the 24 hours round. Daytime in the Atlantic is as long as night. It means you become some sort of an owl, your vision brightens in the night - sometimes it's not a problem seeing the Moon shines like the Sun. But you hide from the Sun during the day - it's hot as hell. Than the music - I had 20 GB of music on my mp3 player, so it was playing non stop - even when I was sleeping. The skies - whether they're cloudy or clear - are too big, there's no end to them. During the night, the last star on the horizon is just a z from the sea. Romance, nothing more. But being alone makes it even more romantic, and the only thing you can talk to is the voice recorder or the camera. I don't have to say, when I listened to the recordings back on shore, they were pretty funny. And scary at times. 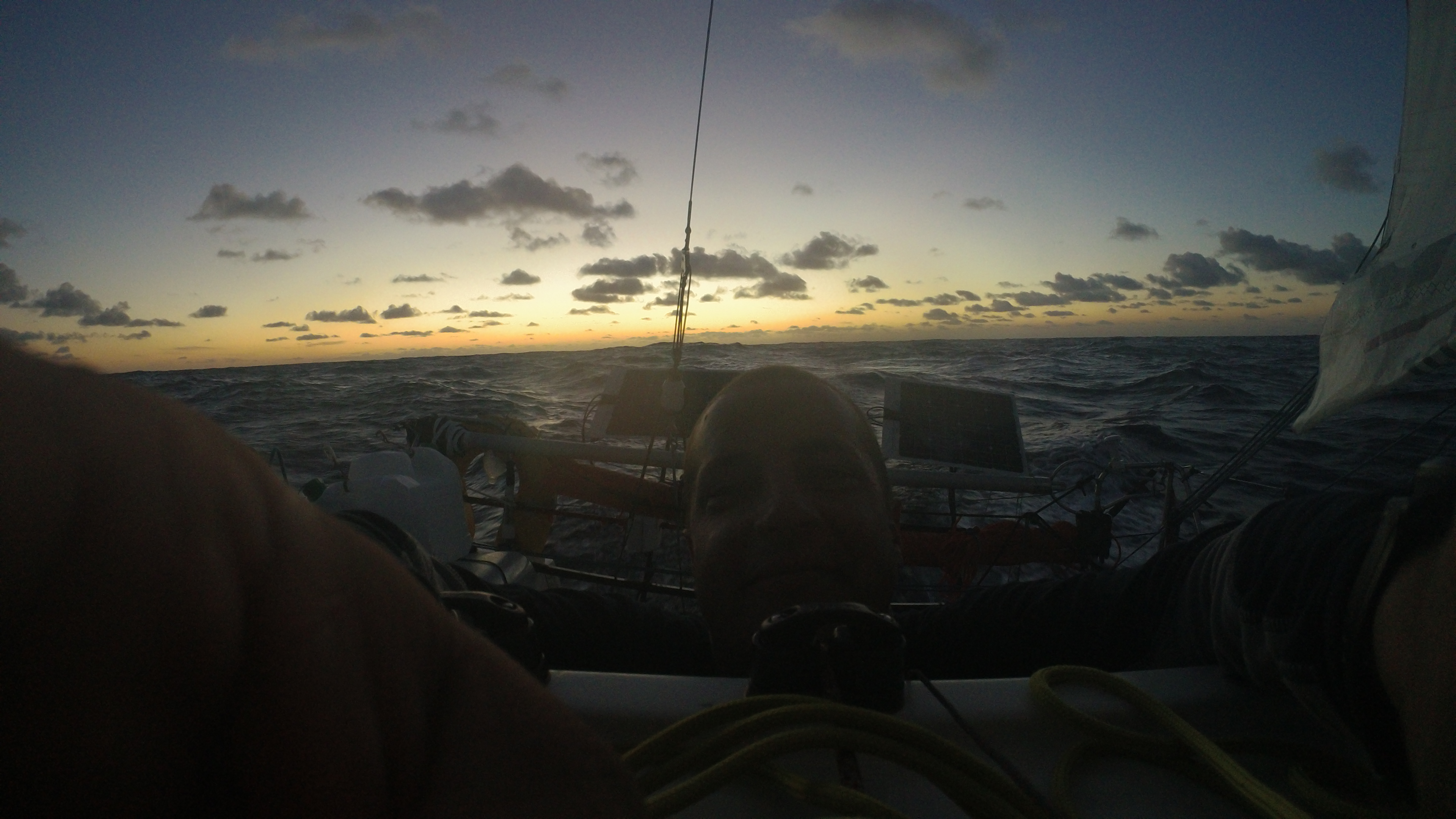 Back in the race, I was trying to embrace the idea of stopping in Mindelo. Lucky for me, Mindelo is on our way, so we didn't have to divert our course that much. On the other side, it means we are getting off the race track. Adapt, adapt, adapt.. It's not easy, but luckily I am not a big competitive character and slowly I am reconciling with the idea of a stop over. Mindelo is a beautiful port city in the northern part of the island of São Vicente in Cape Verde, the city is home to 93% of the entire island's population. It's pretty picturesque and the people are more than friendly. Not just the locals, the Mini crowd, too. There are eight Minis in Mindelo the night I come in, each with their own problem. I see Pavel, the flying Czech, cheering me up and getting ready to leave the port. Pavel is one of the strongest characters I met in this race - his fuel cell didn't work from the start so he had just one or two hours of sleep per day till Mindelo. Than he resolved the problem by installing a generator, but 50 miles after he left Mindelo his electrical circuit collapsed. So he sailed upwind in the lightest breeze back to Mindelo. And redid almost the whole electric installation. Than started from Mindelo again, sailing at full power to the finish line in Le Marin. When we met in Mindelo for the first time, he had a crazy look in his eyes - I don't know if it was for the lack of sleep or just because he was having so much fun. Anyway, the "Mindelo gang" was repairing all kinds of stuff, in the evening had a couple of beers, got some sleep and at around 14.00 hours the next day, we were ready to set sail towards Martinique. 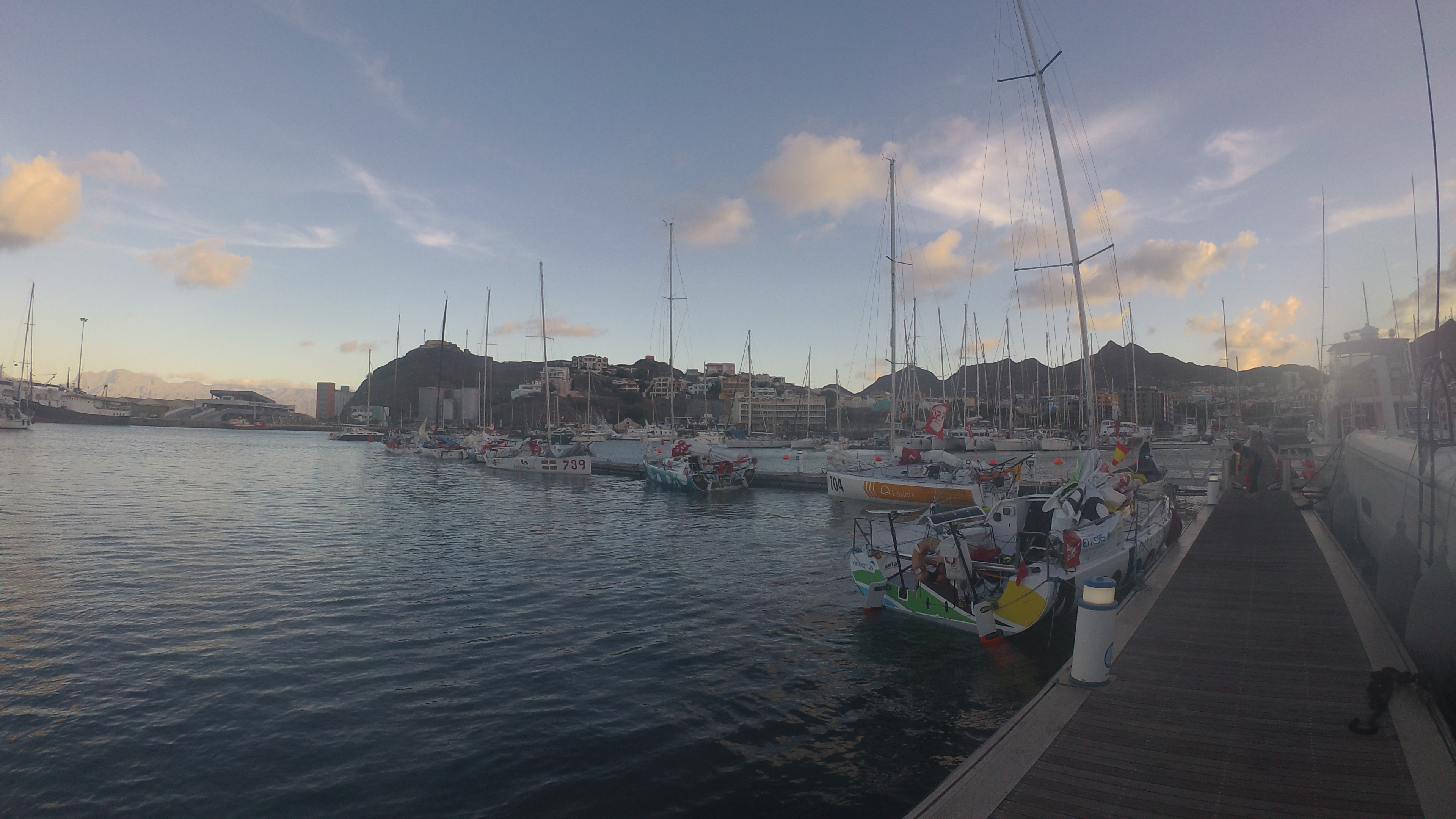 This is the real deal, I think to myself, this is the Atlantic crossing! No land for the next fifteen days. Julien on 551 left Mindelo at the same time, we chat for a while, but after a couple of days we are too far apart. Ambrogio on the other hand, had the same fresh routing info in Mindelo, so we were sticking together for a while. It was interesting hearing the mind patterns of the Italian Stallion, in my opinion one of the favorites of the next Mini Transat. He and his Pogo2 were fighting in the top ten before he broke the fork of his bowsprit and had to come back to Mindelo. We are heading south, that's what the routing said. Consequently, during the night, we start getting the first squalls. For me, the squalls are the most interesting part of sailing in the Atlantic. Otherwise, it's almost the same wind and wave pattern every day. Squalls consist of large clouds with possibility of heavy rain and stronger winds. The first couple of squalls are dry, but as soon as I get the rainy one, I feel like a real Mini sailor - wet as a rat. The squalls can bring quite a big tactical advantage in the open seas, as the wind changes direction and force and one can get some ground in the race. This is how I manage to stay close to Ambrogio for a while, but in the end he manages to sail away, he is faster. Since even before Mindelo I was getting the first autopilot problems - the hydraulics seems to be "slipping" and losing power. I'm broaching very often so I sail with less canvas, I always use the smaller sized spi and (too) often I have to put a reef in the main. But that doesn't bother me seeing we are not in full race mode anymore. 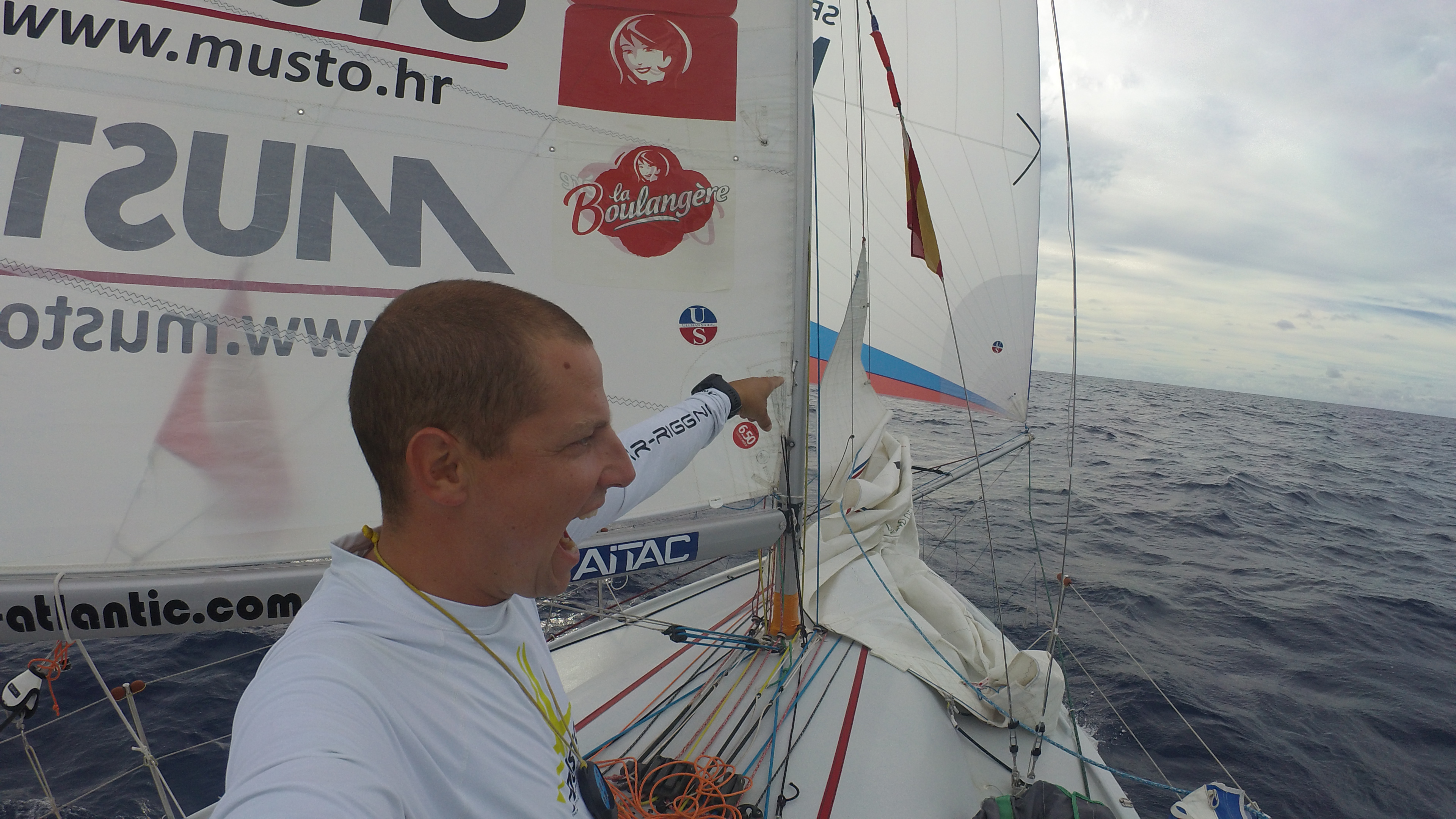 I am studying the "Meteo and Strategy" book from J. Y. Bernot and starting to understand how things work in the open ocean. Frankly, it seems a little boring, but as Ambrogio said - "This is what ocean racing is about." I am happy, I am in the middle of nowhere, planning my life, introspecting. And in the end, those two things is what my Mini Transat is about to become. After twelve days in the second leg, I get a piece of the action - Eloa's mast breaks 1.400 miles from the finish. That sound, I can still hear it sometimes. It's like the sound of a green branch forcefully breaking. Everything stops. I can feel my eyes filling with tears. Oh, what a shitty situation. The next two hours are not something I like to remember, but all the good feelings come from getting to know the bad ones, right? I am sad, frustrated, pissed of. I realize how small I am. After those two hours I start to inspect Eloa for damage, I am starting to turn all my systems back on - from head to toe. I have to find a way out of this mess. 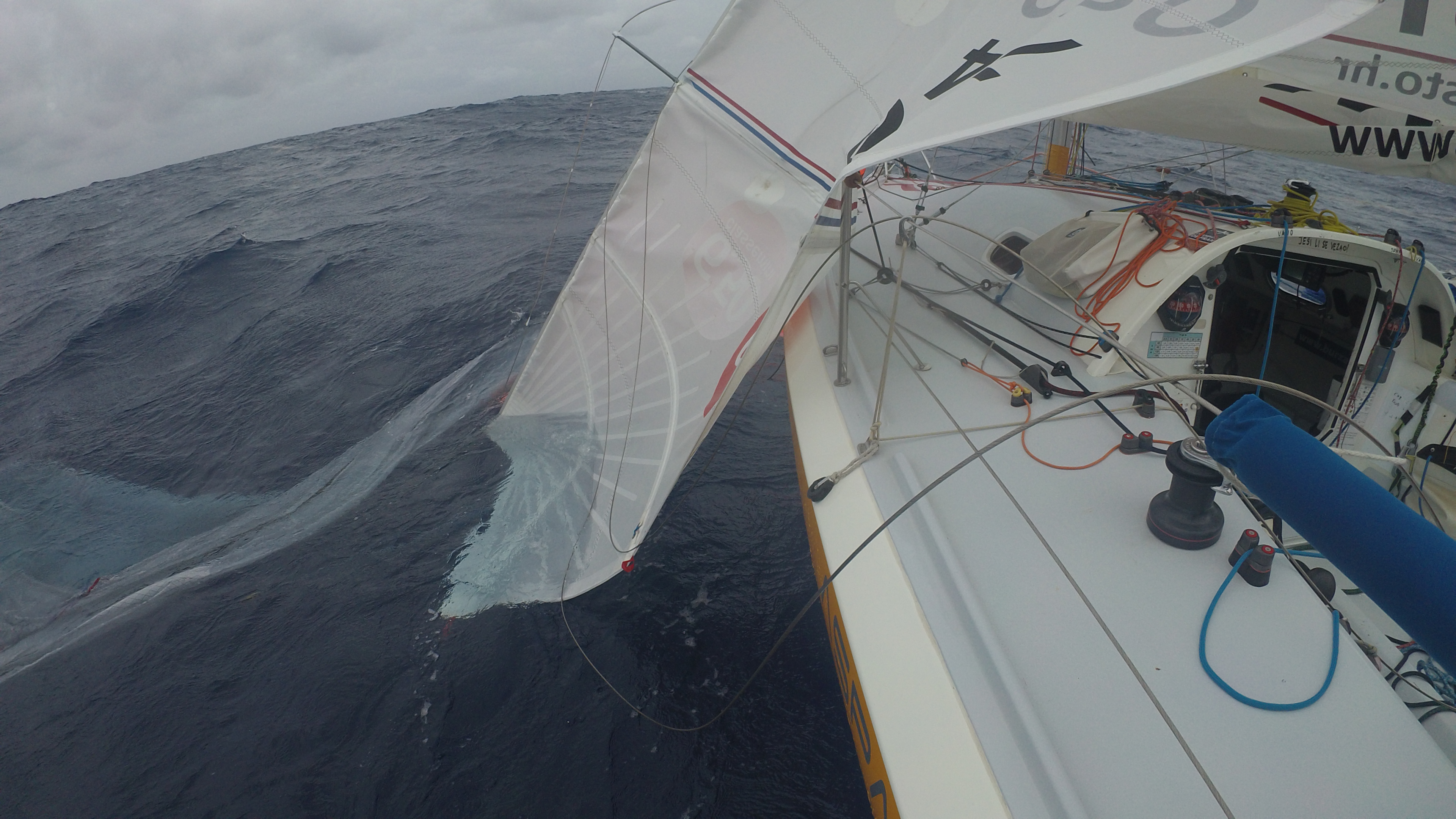 It's not gonna be easy. I start by sewing off all the excess material and parts of the mast. I will try to make a jury rig and see what happens. In the meantime, I turn on the dreaded red button on the tracker - the race organizers must know I am in trouble. The weather is cloudy, just about right. But there's not enough power in the jury rig. We are doing 2.3 - 2.5 knots of speed. According to my calculus, it's gonna take us about a month to get to the other side - it's like walking across the Atlantic! What about water and food supplies? Oh mama. Luckily, after half a day I get confirmation that there is still one more support boat behind me. And it's coming my way! But seeing I am the most southern boat (which I didn't know at the time), it will take a while for them to get to me. I'm not using plural deliberately, I am mad at Eloa. There were so many things going through my mind at the time, but on the other hand - there was equally so much time to think about all of those things. So that's what I do. I think, I talk, I even take a (very short) swim in 4.300 meters of sea. I am very grateful for all the conversations I had with my psychologist Davor, somehow I manage to control my emotions. It's not easy - it's a mix of agony, impatience and anger on one side and happiness, joy and gratitude on the other. Some sort of PMS, I guess. And after 70 hours of being alone, I hear the voice of Stefano - I ask him if there was really no girl onboard the support boat whom I could talk to instead of him. A lame joke, yes, but at the time it seemed funny. Of course I was glad to hear anybody, Stefano included. Although I thought I was clear about my emotions for Eloa, the most difficult part of my three year project was still to come. I had to leave her there, in the middle of the ocean, alone. 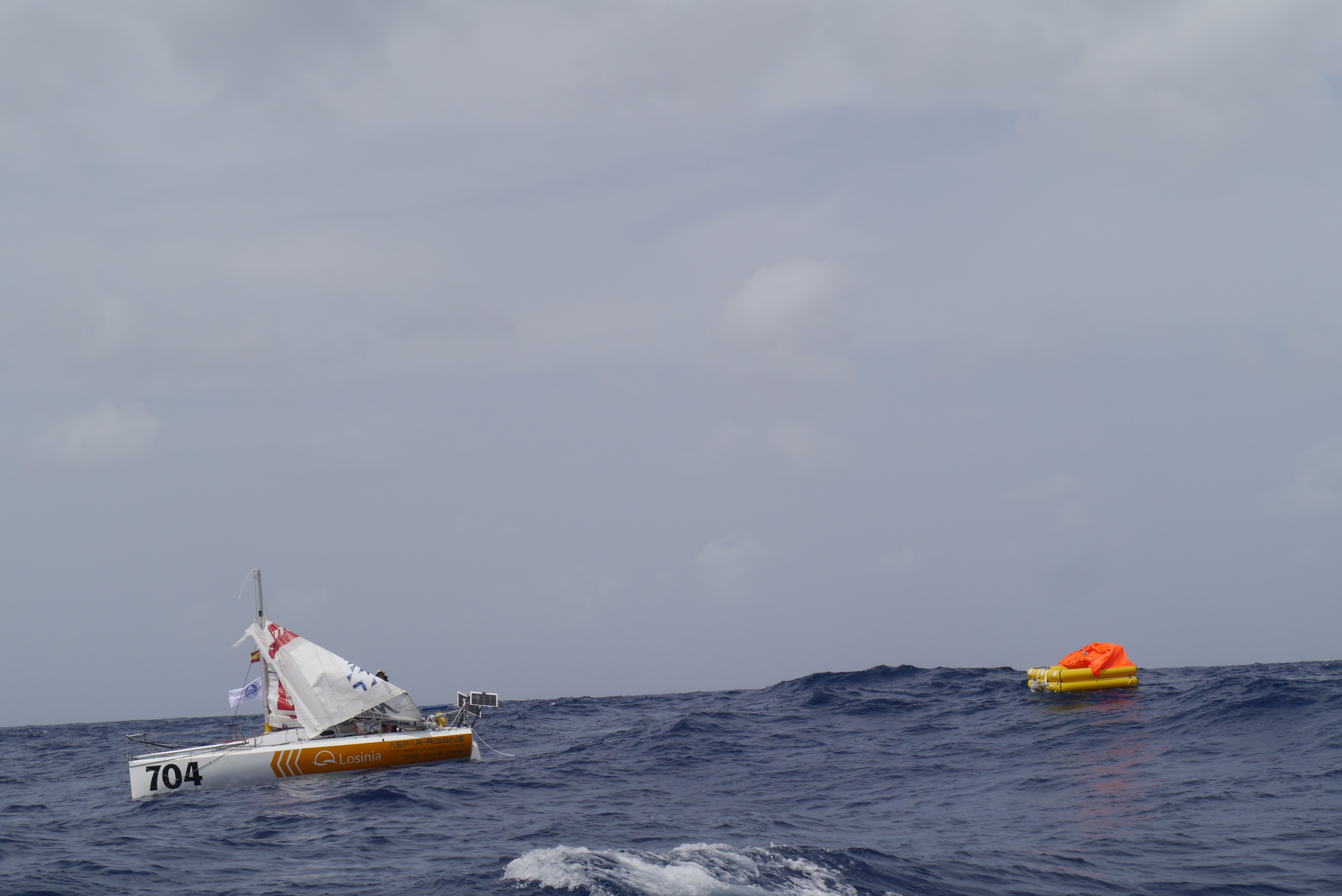 And continue my journey with the marry crew of the support boat, with all the comfort one could want. But in the end, all I wanted was Eloa.

It's been a while since our last story. Few are the reasons, and all of them pretty, pretty, pretty good. The Mini Transat craze has blown off a bit and 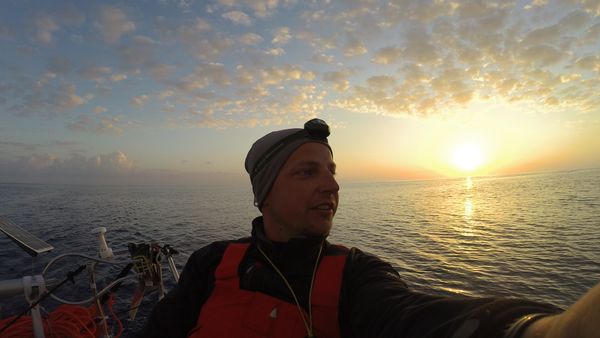 It's been a while since I've entered the "relax" mode, 10 days to be exact. The first five of which I was sleeping, eating and drinking and the latter five