The hardest part of a Mini Transat project is getting to the starting line in France. One of the big steps in getting there is the solo qualifier, a 1000 nm journey in which the sailor gets to know his boat and himself. Eloa's and mine started on April 19th 2015 in Genova, Italy. After the Grand Prix d' Italia, the 500 nm double-handed regatta around Corsica, I had a few days to prepare the boat and myself for the big test, the sailing 'holiday' from Genova to the island of Losinj – Croatia. In Genova it seemed quite difficult, even impossible, but the idea of sailing 1000 nm around Italy back to our homeport – Mali Losinj - was quite motivating. Leaving Genova was hard, leaving my dear Tubo seemed difficult, heartbreaking, but later on showed to be one of the most importand things in solo sailing – having someone to wave to when leaving one port and having someone waiting for you at the next one.. 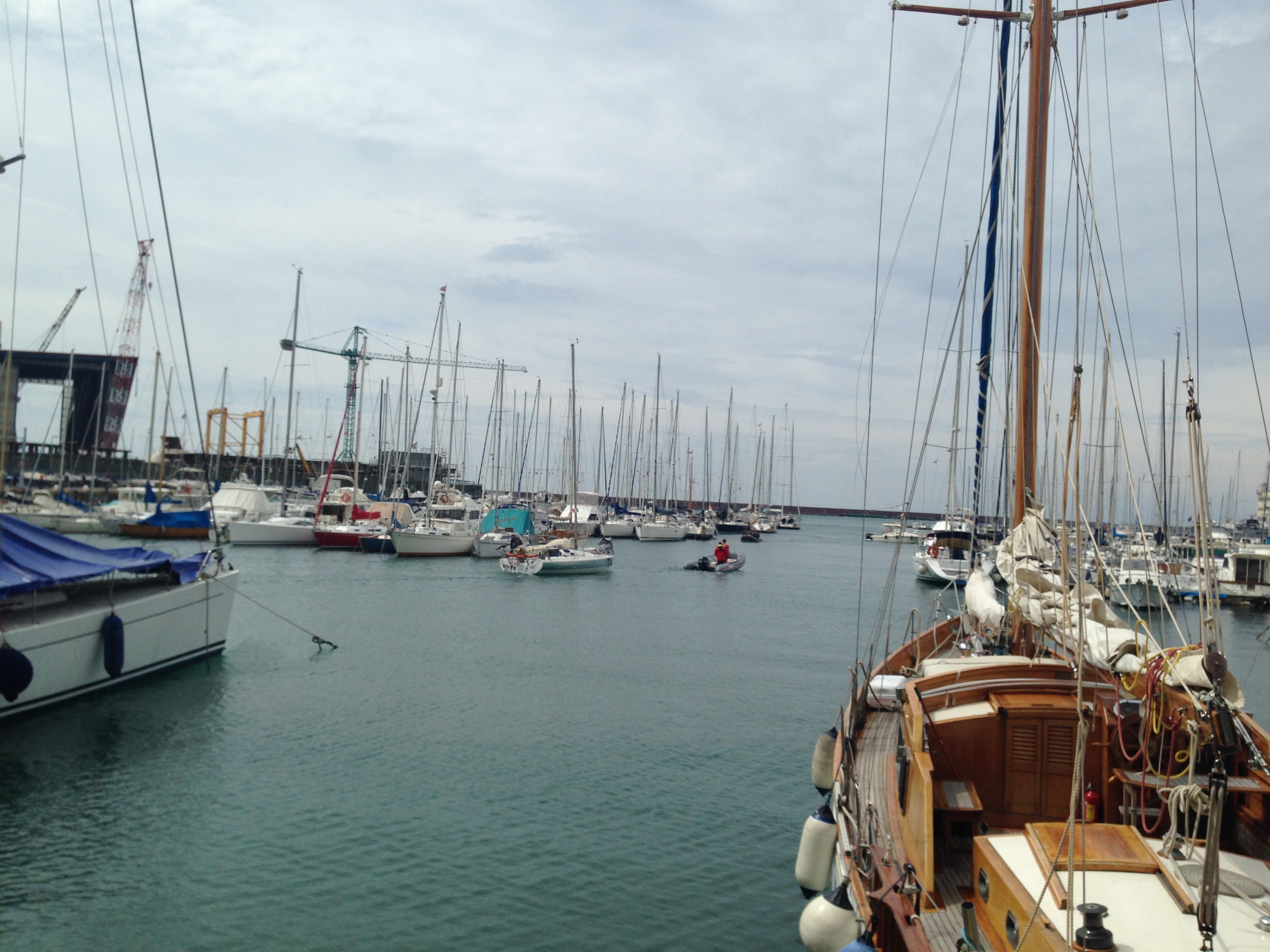 The first couple of days were the hardest part – we started with 30 kts northerlies, sailing dead downwind, with waves of emotions running through my head. Eloa already sailed this kind of journey, but this was my first time solo sailing on such long routes. Where are we going? Why are we going there? How to eat? How to sleep? How not to go crazy? These were the questions popping out of my head.. But after two days I felt the 'click'. I entered the rhythm. Eloa and I were starting to become one. The sleeping cycles of 20 – 30 minutes became normal, the other bare necessities also became usual and fun. 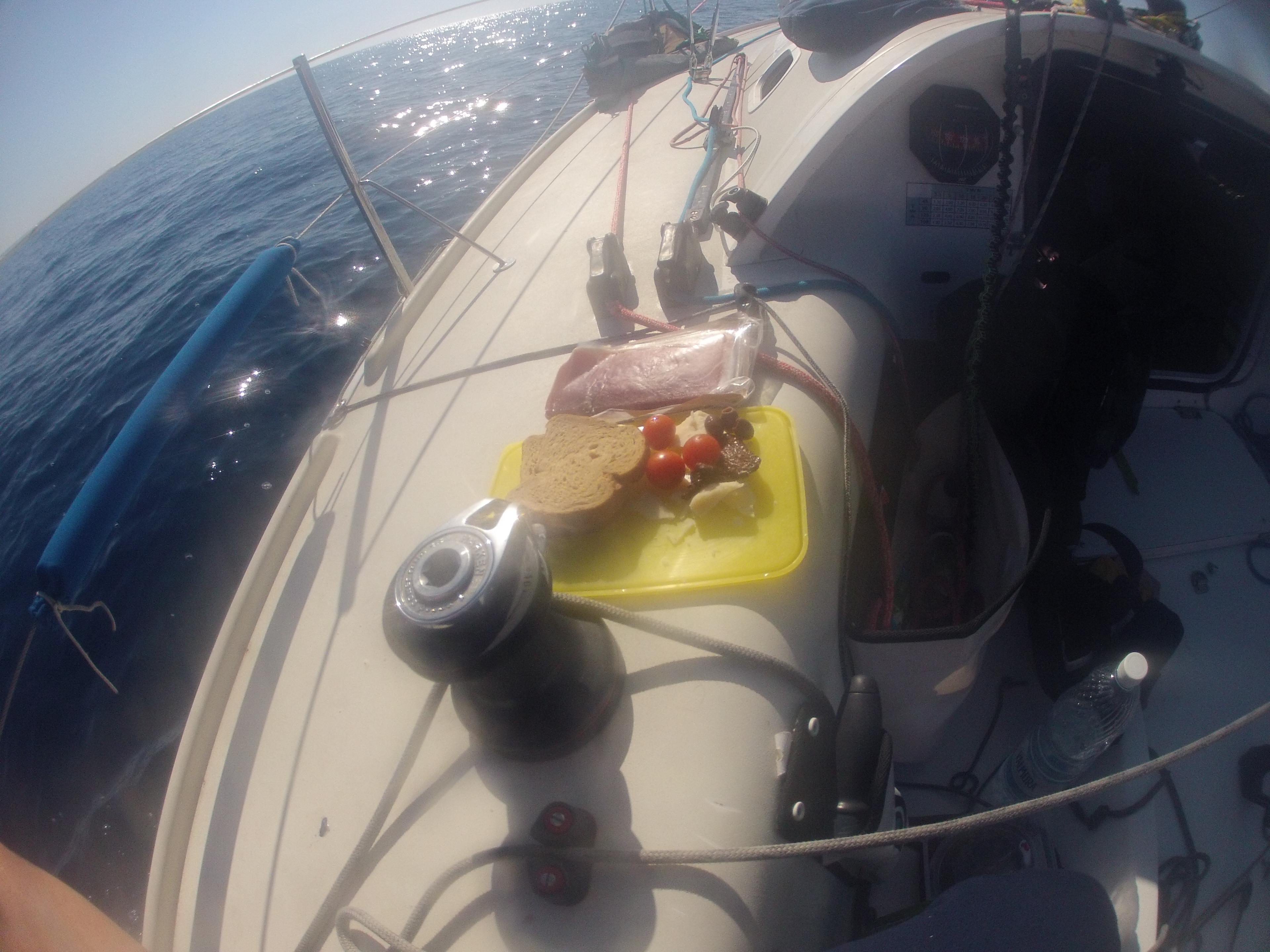 Day three: 15 – 20 kts of northerlies, beautiful surfs along the east coast of Corsica, funky music and singing. Besides music and singing, talking to myself and Eloa is the only way to communicate. And stay normal. The weather forecast for the next 40 hours is challenging: 35 kts of SE winds, meaning upwind beating in big seas which in a 6.5 meter boat can be quite demanding. But we will be ready, we are preparing everything - food, clothes, sails - and trying to get enough sleep. Day four: the southeasterlies come as predicted, we are crossing the Thyrrenian Sea from Sardinia to Sicily and hour by hour reefing the sails. It is fun, it is a whole new experience.. I'm gaining confidence in Eloa's capabilities, still need to be more confident about mine. The waves are crossed, I fear the 3 meter rolling waves coming from starboard, they might hurt Eloa. But she doesn't mind, she seems happy and the dance goes on. We are the only ones in sight and I'm trying to imagine the feeling of sailing solo in the big Ocean. If this feels good, the Ocean must feel extraordinary! According to the weather info, the passage around Siciliy will be too dangerous, we won't risk anything and we decide to go through the Messina straight. A decision which results in a couple of days of light winds. Funny, while the other (S) coast of Sicily is being washed by big waves and winds, our (N) coast is washed by the Sun and light winds. But light winds are even worse than strong winds, they are irritating and annoying. The sails are flapping, the speeds are low.. Aaaaarrrgghhhh! 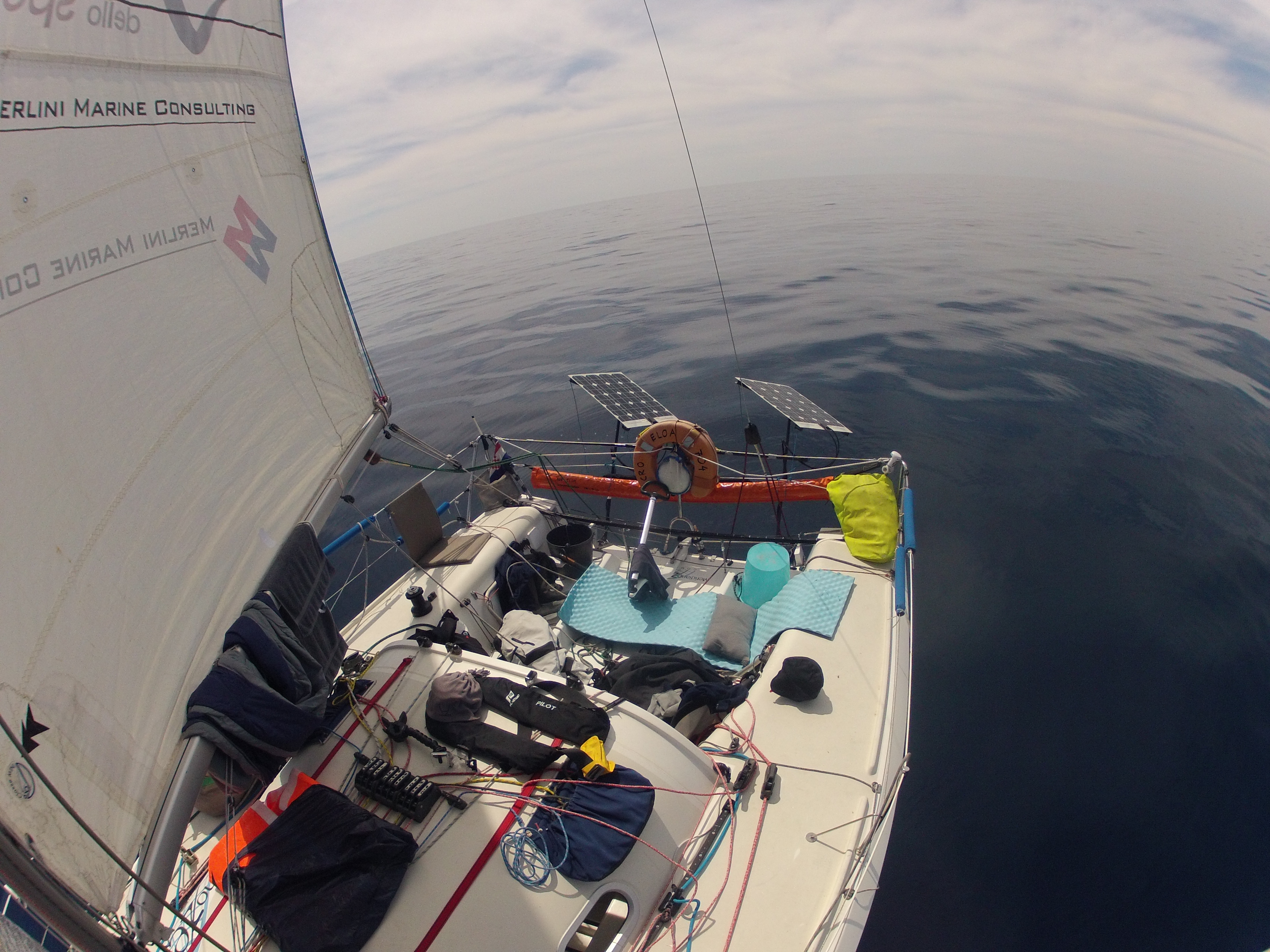 After two days of light winds, we enter the Messina straight with 25 knots of SE. It is night, but the currents are favourable and we start tacking. The small boat passage zone is quite narrow and we receive instructions from the Messina tower how to pass it. At 4 am the wind dies out and we are thrown in the big ship separation zone. Hoochimama, the moving walls are near and getting bigger. The AIS is beeping, but at least they can see us. At dawn of the 7th day, we are out of Messina and sailing in the Ionian Sea, one of the four seas in our journey. The Ionian Sea proved to be the most kindful: 20-25 knots of S-SE with long waves – the ideal sailing conditions: constantly changing from medium spi to Code5 and back, one reef in the main and jib. Charging myself with power bars, chocolate and isotonic drinks. Very enthusiastic, I am steering for long periods of time, enjoying the perfect sail. 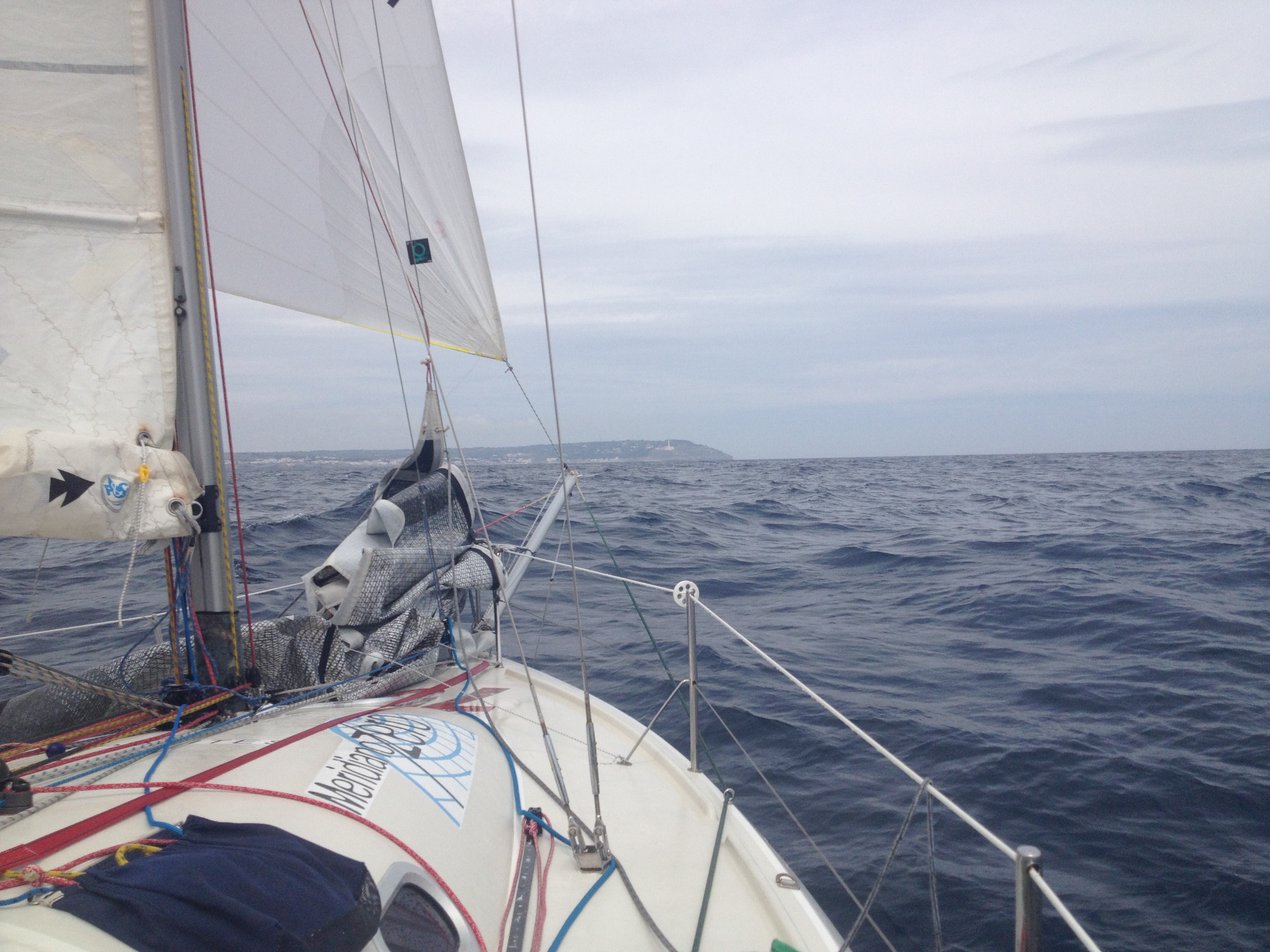 But sleep deprivation showes its nasty side, I am entering the Adriatic Sea, the Otranto straight is busy with big ship traffic. The SE wind picked up and the waves are throwing me all over Eloa. In the afternoon I somehow manage to lower the big spi and get some sleep. After 30 minutes everything is back to normal. At least it seems so. In the evening the wind drops, we are sailing past Brindisi, and altough the forecast predicts southeasterlies up to 30 knots, I decide to hoist the big spi. Why? I'm guessing fatigue. I was warned by many Miniists that fatigue is the worst enemy of the solo sailor. Seems I needed to learn it the hard way, making my own mistakes. As the wind picks up again, Eloa is out of control. The pilot is unable to control her, I don't even have the strength to hold the tiller. We are passing (too) close to big ships at speeds around 14 knots. My head has very unusual demands, giving strange orders to my body which executes them like a clown. If only I could have filmed me. 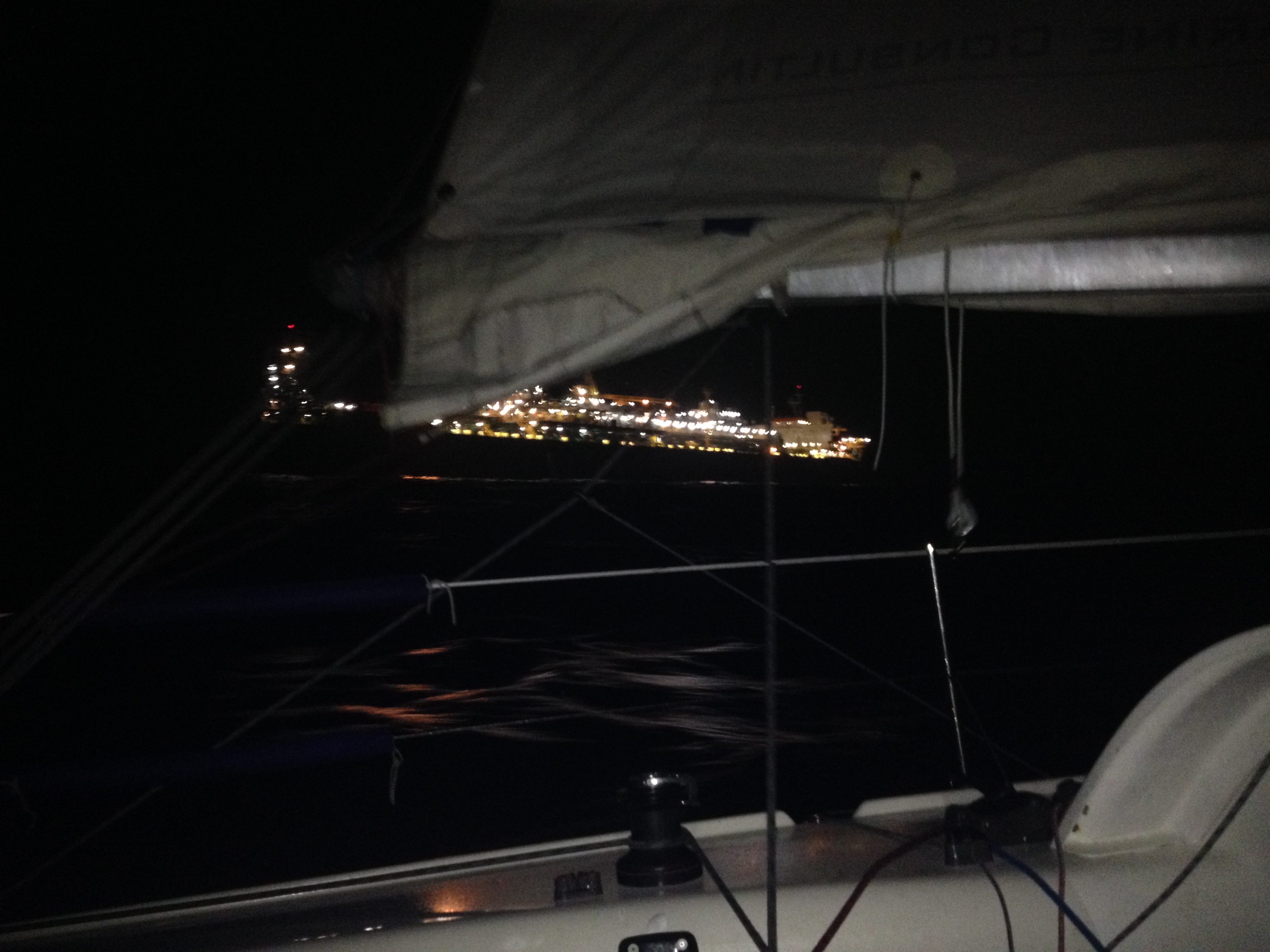 After a couple of hard hours I manage to pull the spi down and go to sleep. In the morning I figure out all the things I've done wrong. Everything is back to normal and we are sailing home. The wind is still around 25 knots and we are blasting towards the island of Lastovo – Croatia. We are still 130 nm from home, but sailing in known waters. I don't feel like going home, this journey is even bigger than I thought. I was afraid, sad, happy and respectful to the Sea, and I realized the Sea is our friend. Solo sailing is not all about the Sea, it is also about Us. I feel I have learned a lot about the Sea and Us. But I don't want to give anything away. 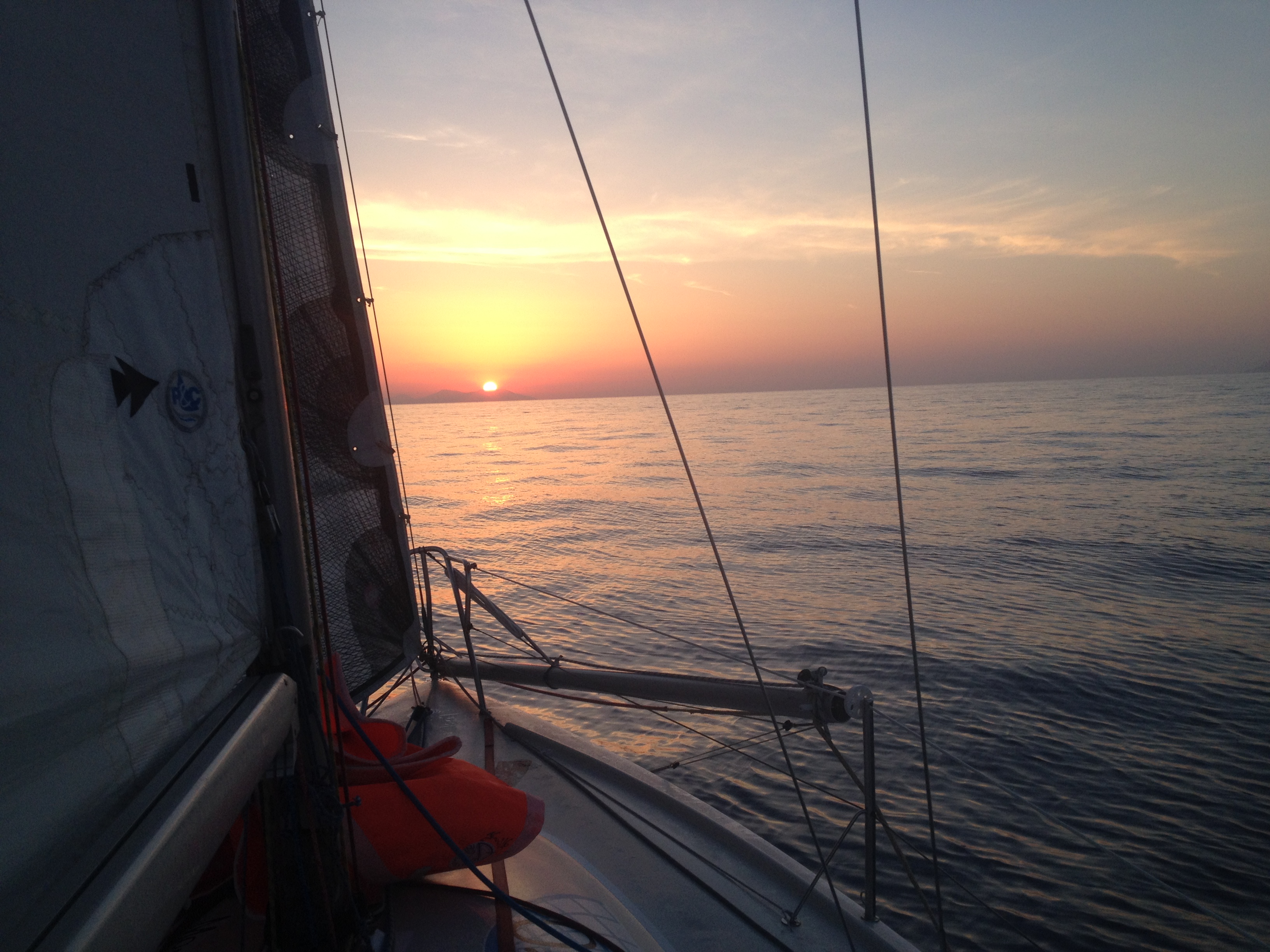 After 11 days and 8 hours at sea, on the 30th April around 9pm I see a few lights coming towards me. It's my freinds' boats! A big welcome party awaits...