After the solo qualif experience, I had to return to the everyday life routine. It wasn't easy, as in the solo qualif one passes through an emotional catharsis and realizes that many things in real life are forced upon us by our lifestyle. But, the philosophy of life isn't wat this blog is about - at least it's not its primary theme..

The aftersoloqualif party was exceptional - waking up in my bed at home the next day was a little strange. But after three days I forgot all about the big journey, at least it seemed so.. 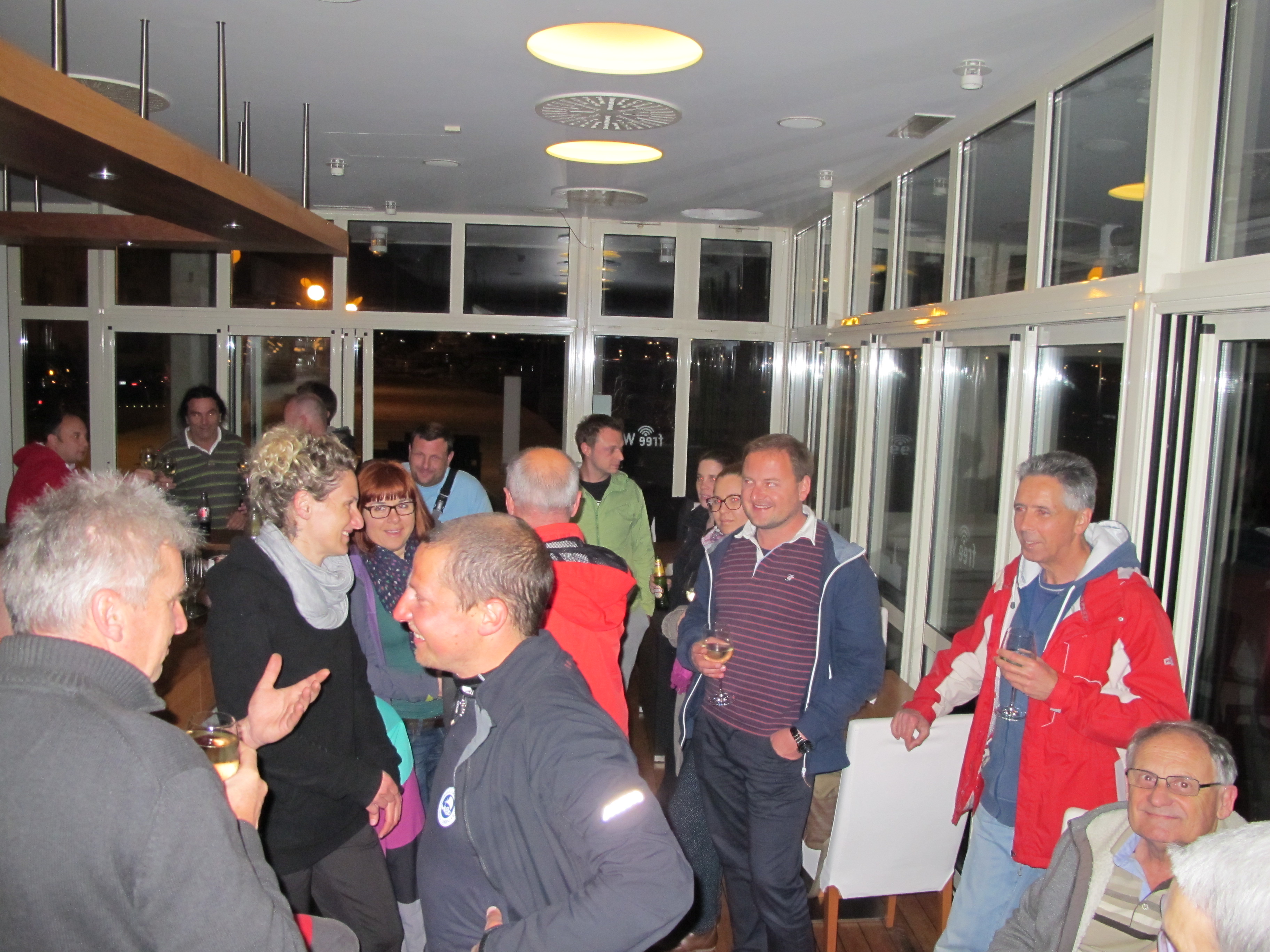 With work obligations and family joys, there's not much time left to enjoy enhancing Eloa. But one hour a day hanging around Eloa is more than enough. I have the luck of having Eloa moored in the marina where I work, near my office and my house, so a small step forward is made every day. It can be just spending time with Eloa or checking and improving her lady parts..

Our first training regatta in summer of 2015. was the Pesaro - Losinj, an 80 NM regatta from the Italian port of Pesaro to our home port - Mali Losinj. It is organized in the beginning of June by the YC Pesaro and our home club Jugo. Eloa and I started the transfer to Pesaro two nights before the regatta, the weather was perfect - clear skies with NW winds up to 12 knots. As the days are the longest in June, the Sun came out early, but the wind died out. The small outboard engine can push Eloa at max 4 knots of speed, but it was better than 2 knots with the Code0 and full main. On the way to Pesaro we passed by huge gas platforms, deserted, looking like a great place to organize big parties. 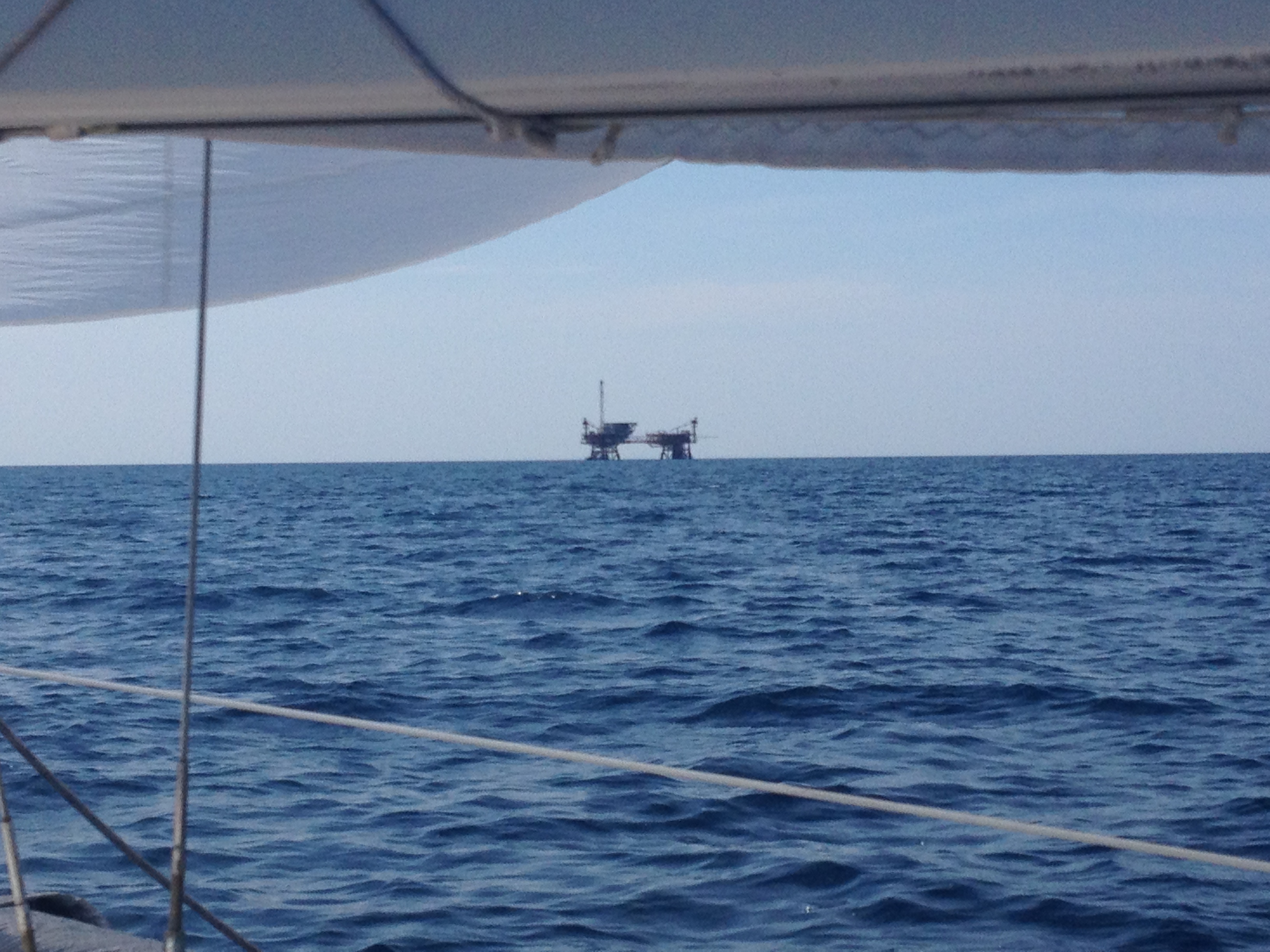 The Pesaro welcome was really nice, as the only Croatian representative and president of our YC Jugo, I was immediately taken to a big dinner in an exclusive restaurant in the YC, where I was the only one wearing shorts and Crocs. The "chiacchiere" (Italian word for conversation, small talk) lasted for a couple of hours, than we turned in for the night as the day after there was a long way ahead of us with the forecasted light winds. We woke up early in the morning, did our morning routine and headed for the starting line. There were only 10 boats competing in the regatta, and they were all bigger than Eloa. But the light winds don't favor the bigger, heavier boats, and we managed to stay in the top three all day, changing sail after sail.. 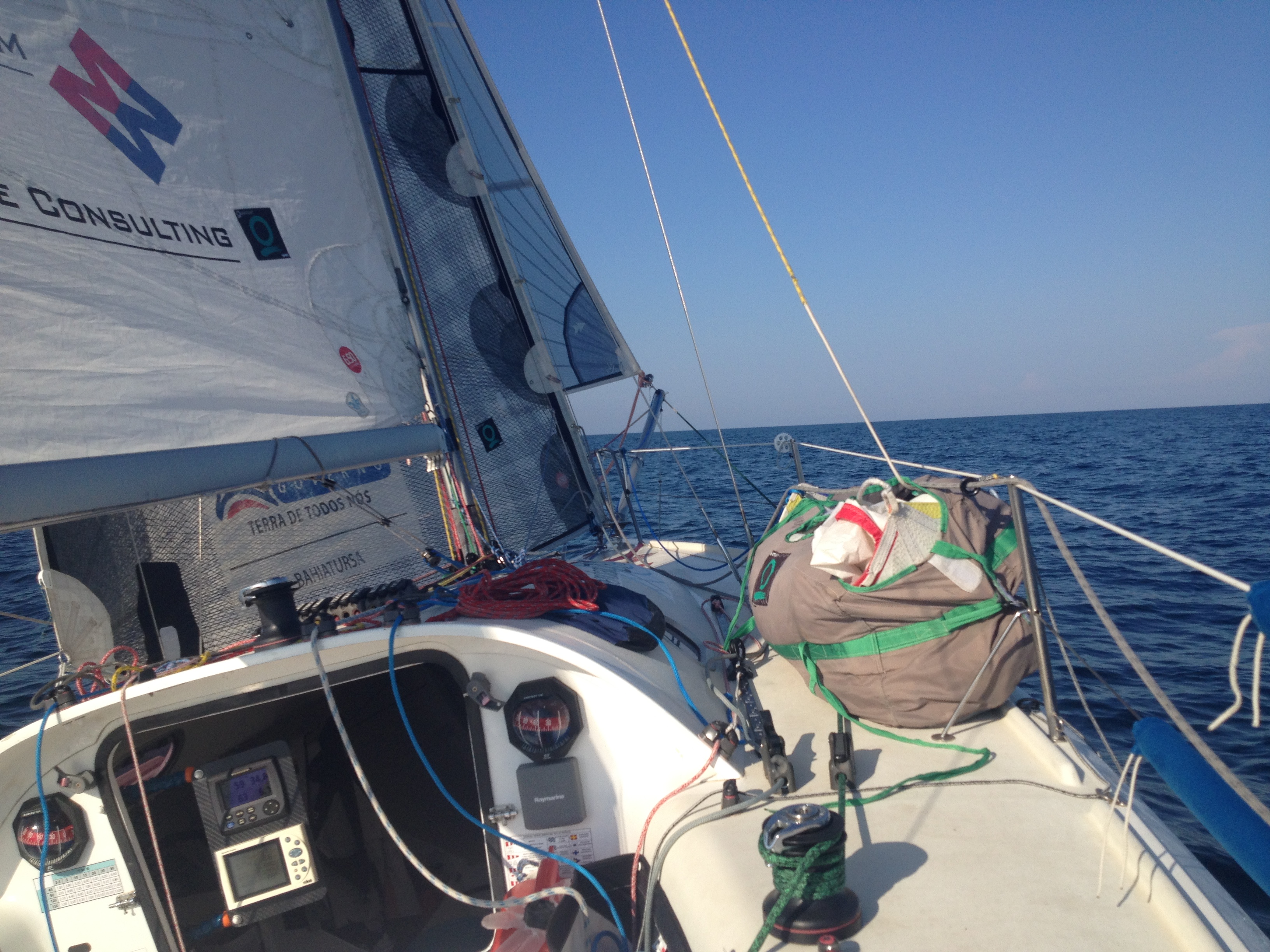 In the afternoon the wind turned from NE to NW at 12 knots, and the bigger boats started gaining on us. Fortunately, during the night the wind dropped back to 5 knots and with sunrise we were in front of the island of Losinj, with the first boat stuck in the "bonaccia" (no wind), I'm guessing for for a couple of hours. In the end, we finished third overall, we were the smallest in the fleet and the only singlehanded boat. As this was our first solo regatta, I learned a lot - it is different to sail the solo qualif, you are not sailing at 120%, while in the regatta you have to give your max. We spent the next day showing our Italian friends the local cultural sights - the home of the great admiral Agostino Straolino and many others. After the dinner, we were happy to take a long sleep as Monday was just around the corner..

The next event to be sailed was the Liburnijska regatta, taking me and Eloa from Mali Losinj to Rijeka in a 50 NM long race with only three competitors. Besides us, it was just a racing Millennium 40 and an Archambault 40. The starting signal was given at 18.00 and we were off. The night was incredibly humid and sleeping was not an option. During the night the lights of the other two giants were really near and we were on fire. In light winds Eloa proved to be fast, but the sail configuration is easily mistaken, so one must be very careful. As the Sun came out, the two 40 footers were only a look away. Great! We fought well until the breeze picked up and the big boys left us standing alone. But we didn't give up, as a dark line of wind was catching on us from behind. A nice 20 knots northwesterly lifted us and we were finally sailing at full speed. 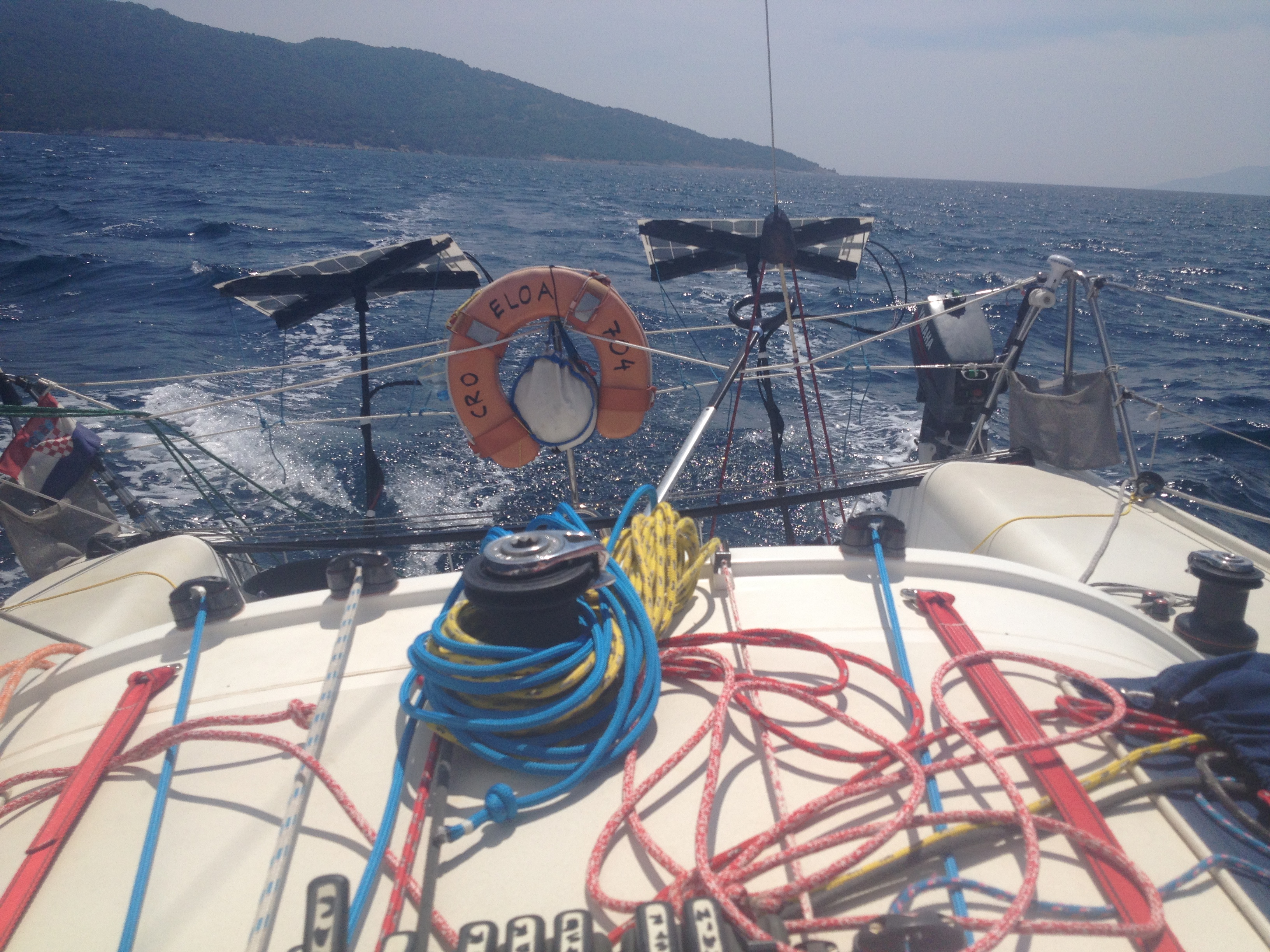 Seeing the city of Rijeka getting bigger and bigger, we saw two small sails just in front of the port. It's them, the big boys, anchored in a no wind area just in front of the port. That's the cruelty of sailing, while they were fighting each other in a slow-mo battle, we fast forwarded ourselves just behind them. Of course, they got the wind too, and they finished just a couple of minutes ahead of us. We felt good and confident, we sailed well and the wind didn't let us down in the end. Off for a beer and than home..

The third regatta of the summer of 2015. was the Losinjska regatta, organized by our home club Jugo, sailed in the known waters of the Losinj archipelago. The regatta takes place in the first weekend of August which means high temperatures and stable thermal winds. After all the organizational processes and obligations, we finally went sailing on the Friday before the regatta. My partner for this regatta was Igor, a long time friend and a great sailor. I think this was his first time sailing on a Mini, so he was very enthusiastic and showed his powerful sailing skills. The first day of the regatta is reserved for the coastal navigation from Losinj to he islands of Susak and Ilovik and back. But the expected thermal winds were nowhere to be seen and it turned out to be a difficult sail, taking us six and a half hours to sail 17 NM. We started very well, but the wind died out around Susak with currents pushing us away from the buoy. 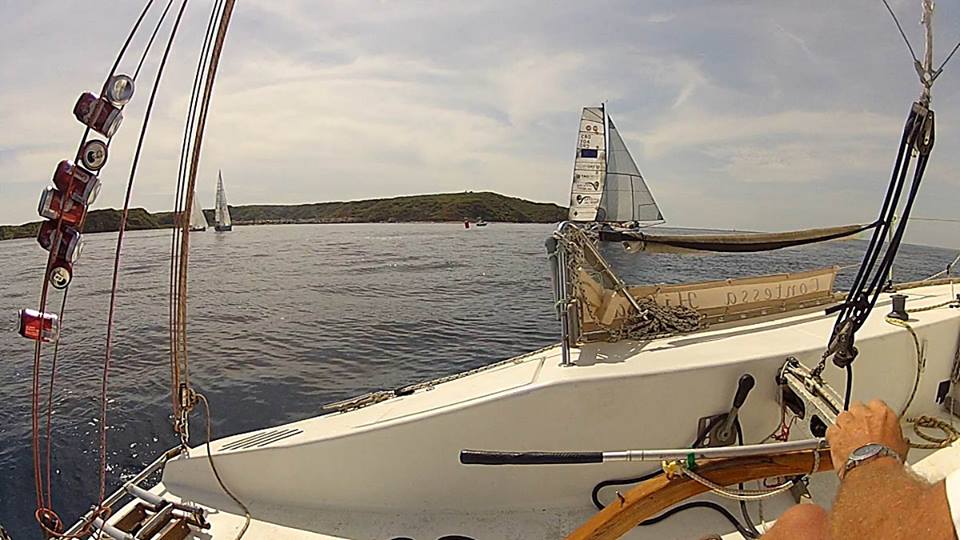 It was funny watching boats trying to pass the buoy - the wind would show up for about three minutes, we would get to about 50 meters from the buoy and than - back we go with the current. One boat was even thrown about a mile back. But somehow we managed to finish the shortened racecourse, and rushed back to port for some beers and a great dinner. There were 40 boats in the regatta so the party lasted till late in the night.. The next day, the expected thermal winds finally showed, and the upwind-downwind races could start. The weather was perfect, there were 10-12 knots of wind and the Sun was sweating all the bear out of us. It is not easy to sail a doublehanded regatta with short upwind-downwind legs, but we seemed to be functioning very well - Igor was at the helm doing all the sailing, while I was running around the boat maneuvering and helping with the tactics. 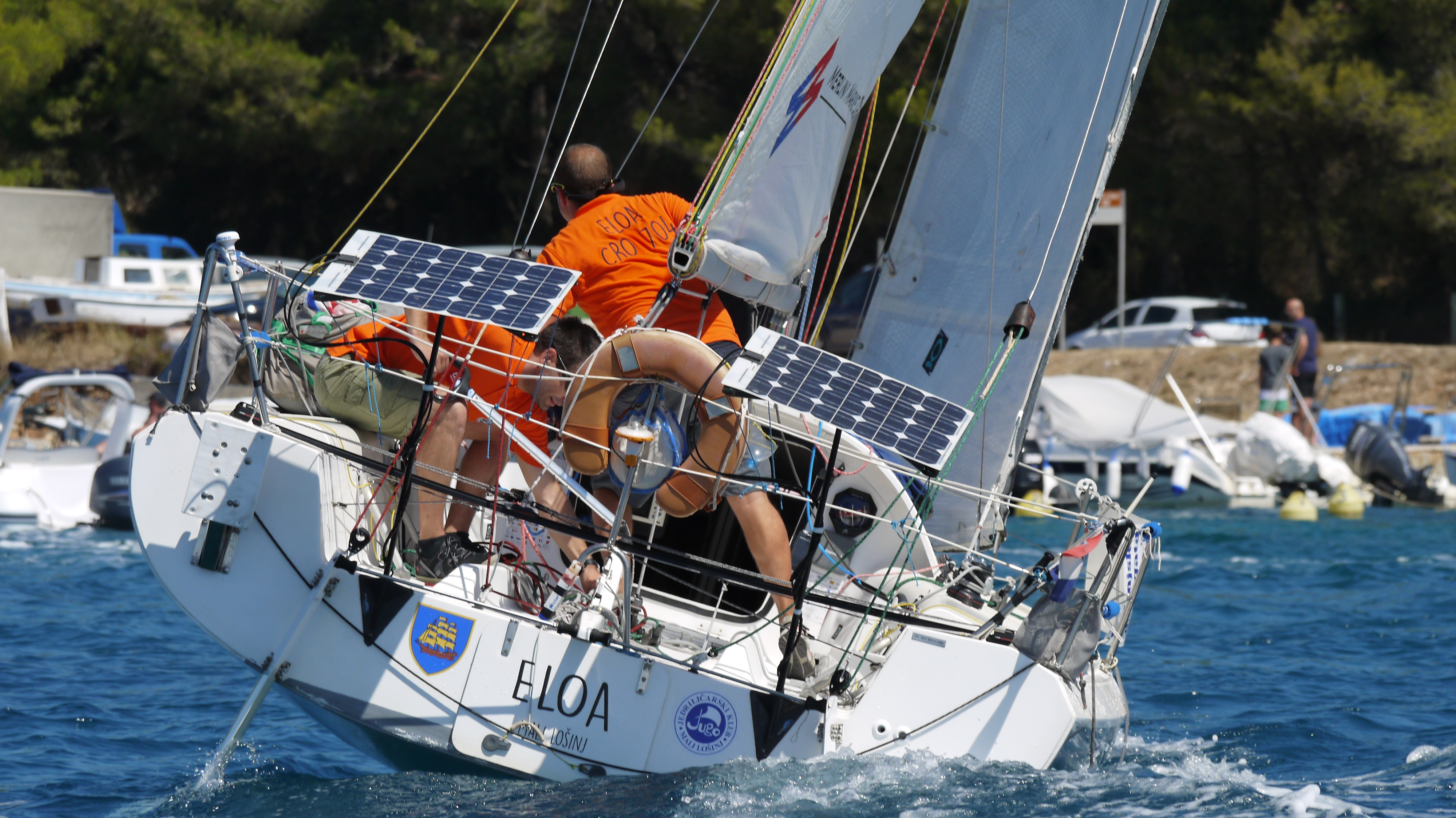 We sailed very well, all around us were big boats, some even crazy enough taking the right of way to a smaller boat just because - it is smaller! As we were the smallest in the fleet, we were put in a bigger group, but still won first place, in front of our biggest competitor - Rantaplan.

As the summer was about to end, there was one more regatta to be sailed - Trka Oko Krka (TOK) - The Race around Krk island. Our co-skipper for this regatta was also Igor, which meant we were well prepared for sailing and pretty horny too, as there was another Mini competing in the TOK, an old proto - No. 231, owned by Dario, a young and perspective Croatian sailor. The regatta started Friday, September 11th at 19h, with veeeery light winds which were forecasted for the whole night and the day after. The race is sailed around Croatia's biggest island - Krk, with a length of cca 50 NM. There were 25 boats competing in the race, including some big Open racers, as well as a VOR 70. After the start, we made an excellent tactical decision and sailed closer to the island of Krk which resulted in Eloa holding the 5th overall position until Saturday morning. When the wind picked up from 2 to 10 knots, the bigger boats started gaining on us, as well as 231. Around noon, the wind died out again and we decided to abandon the race and head to our home port. It wasn't an easy decision, but we were short on time and the forecast predicted very light winds. Unfortunately, we later found out the forecast was wrong, and we could have finished the race, which would also be very interesting as 231 was really near.. 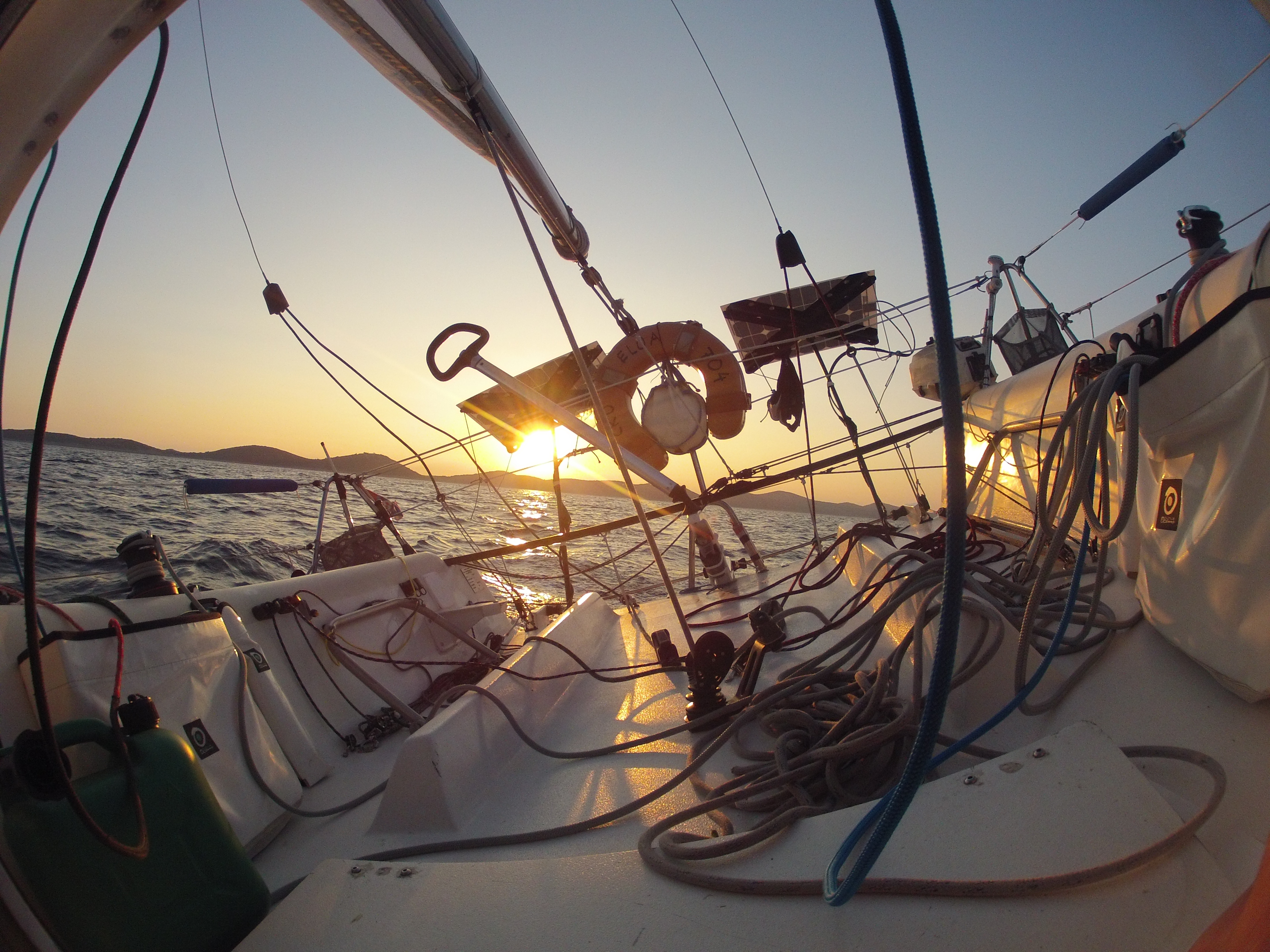 The summer of 2015. is over, the autumn/winter regatta and training collection awaits!