It's for Marie Agnes Peron, a sailor that went missing in the Bay of Biscay during the Mini Transat 1991., that this [regatta](http://map.winchesclub.org/) is a hommage to. A 220 nm long solo race, starting from Douarnenez, rounding the glorious Pointe du Raz, heading to Ile de Groix and than around Chaussee de Sein back to Douarnenez. But let's start from the beginning..

"La long route" from Mali Losinj to Douarnenez is long approximately 2000 km, meaning we had to plan and prepare our trip quite well. It all started with Eloa mounting her canting trailer so she wouldn't exceed the 2.55 m allowed width in Croatian and Italian roads. It's quite a delicate manoeuvre, but everything was set up well, even the sails and other equipment stacked inside the boat. Luckily, we are two Croatian boys sailing the MAP and Fastnet, so the trip was fun using motorolas to communicate on the highway. "Chakotay" and "Beam me up, Scotty" were the phrases most used.. 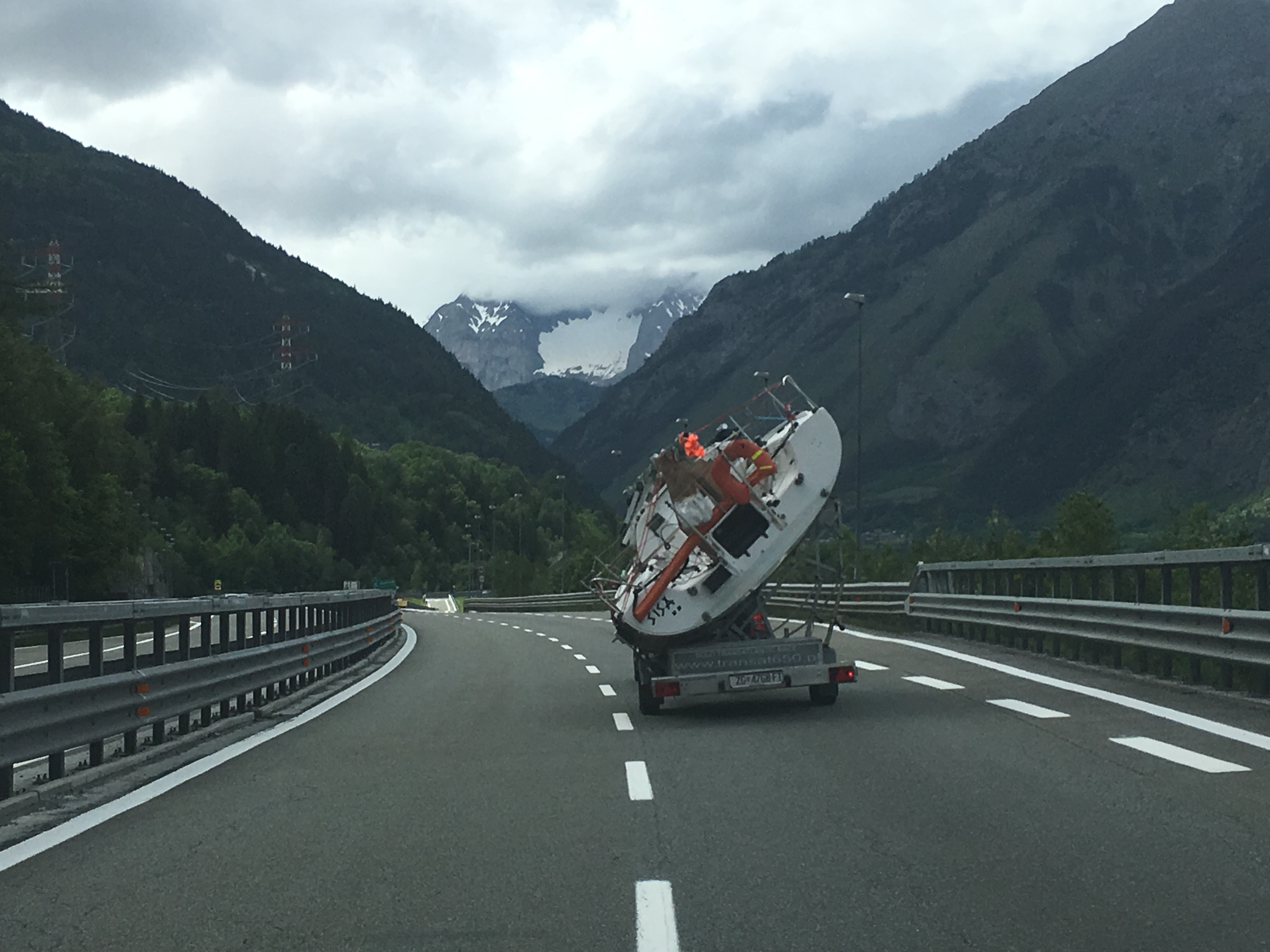 We didn't sleep much, Dado had two blown tires, but in the end, we arrived safely to Douarnenez. It takes about a whole day to set up the keel and mast on a Mini, than one has to trim, check, repair and wash all over and over again. I had some technical problems with the mast and some structural problems around the keelbox which will be later resolved with the help of Sam Manuard and Davy Beaudeart. The "controle secu'" is the check of all safety equipment required by the Classe Mini and that list is quite long. So finally, after all the prep work, I was able to test sail Eloa in the Bay of Douarnenez. 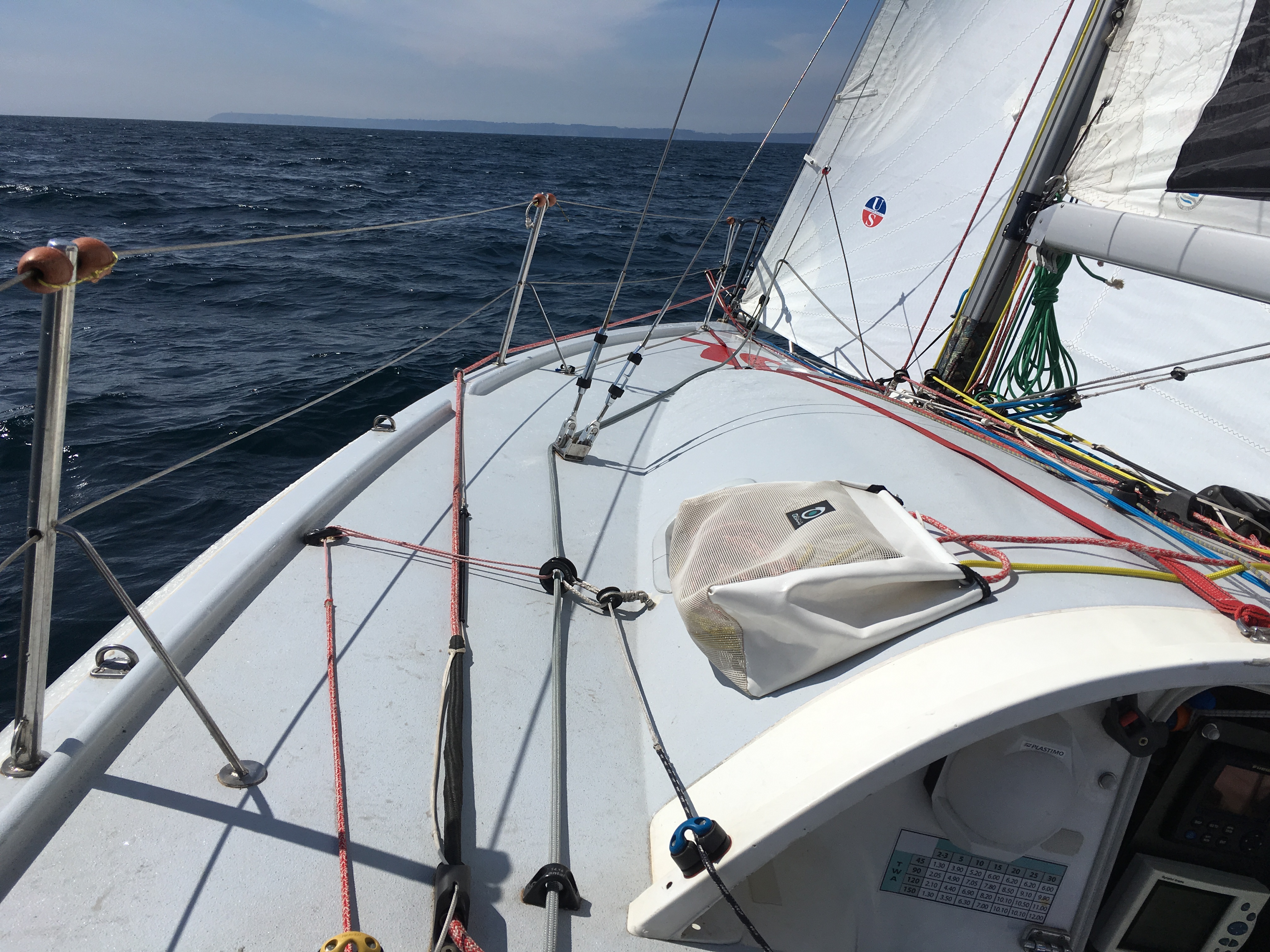 That feeling when you pull your head out of the boat and go sailing.. Everything falls back into place, you are happy, your boat is happy and the singing goes on.. Back in port, Sisa was also ready having resolved her own technical issues. The weather was extremely nonBretagnish, Sun and temperatures rising above 25'C. We let Eloa and Sisa hang out in the port while Dado and I went to hang out with beers. 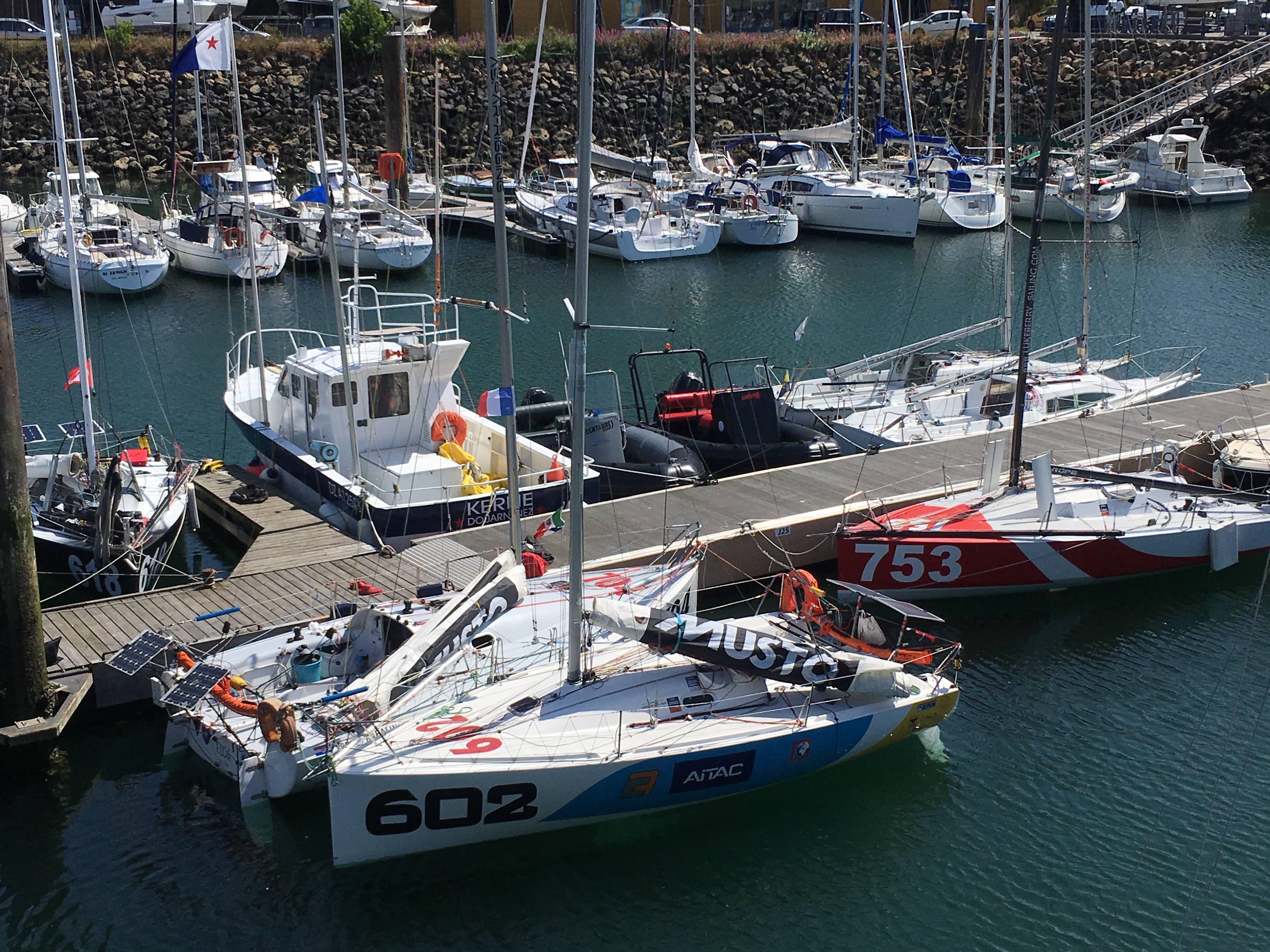 The day before the start we prepared our weather forecast, our routing and our food supplies. A good night sleep and the start was just a day away.. The level of organization of the MAP is quite high, so after the meteo and race briefing at 10.30, we had some time for final preparation before the starting gun at 18.00. According to the weather guy, Jean-Jacques, the winds after the start will be light, and just during the second day of the regatta the NW would come in at 15-18 kts, turning W-NW-SW till the end of the regatta. The forecasted wind directions and shifts were incredibly exact.

After the starting gun, there were a lot of shifts and different angles of sail towards the famous Rez Sein, the passage between the Pointe du Raz and Ile de Sein, in which the currents can reach up to six knots! I solved the Bay of Douarnenez shifty riddle pretty well and reached Raz Sein in second position overall, quite motivating. It was completely dark, all I heard was noises of sea breaking in the coast and current swirls around Eloa. Than the descent started: 9 knots of boats speed with just 6 knots of true wind, all upwind! Eloa was like a kayak in a river pushing her through the Raz and spitting her 2 nm later. Fun but scary, scary as shit. Towards the Cap Caval waypoint I lost a couple of places to the new generation Pogo3s who were having their own mono fleet regatta and showed to be veeery fast boats, maybe even to fast for the Series class.. Towards the islands of Glenan we had 15 knots of northwesterly and were enjoying the downwind run until... until I saw a cardinal buoy to be left South on my starboard side, meaning I was passing it on the North side.. hmmm.. what's that doing there?? U pičku materinu, I missed a waypoint! Spinnaker down, jib up and a short upwind beat to round the buoy.. But in the way, my spi pole went under the boat.. Mamaaaaaa!!! An hour and a half long battle with the spinnaker and his god damn pole. A couple of boats pass me, looking strangely at me and Eloa battling the big white motherfu**er. My energy level is critical, but I put the spi up again and start the descent towards Ile de Groix. How much I learned in only an hour and a half.. In the end I was lucky having my spi pole in one piece. We round Ile de Groix with a Pogo3 (893), Argo (836) and Nacira (821) and start the upwind leg towards Chaussee de Sein. NW turning W and than back to NW, up to 18 kts the weather guy said. Well, a little more than 18 kts, up to 25, which in an upwind leg for a Mini is quite shaky. I don't eat enough, haven't slept the whole first night and the fatigue gets to me. I fall down on the cockpit floor and get a few naps. During the second night, the wind drops to 15 knots, than back to 20 - 25 and so on. But I manage to sleep my 20 minutes rounds, I'm confident about Eloa's performance and she is taking me to Chaussee de Sein. We round the buoy Chaussee de Sein in the morning with the Sun showing! What a beautiful sight to see, after a whole day of rain, the colours in the sky change to positive. We are flying the big kite and trying to stay away from Loic and his Nacira 821. We manage to stay away, and after rounding the two final waypoints, Bas du Lis and Veille, we cross the finish line at around 17.30 on Saturday, after 1 day, 23 hours and 29 minutes at sea. What a great race, a great experience, a great result! Tired but happy, the common feeling on a Mini..

After the race, Eloa and I get some much needed rest because on Monday we have to be at Davy Beaudeart's [Nauty'Mor](http://www.nautymor.fr/) to repair our cracked keelbox. Mast down, boat up and off we go to Hennebont where Davy welcomes us in his working clothes and gets to work right away.. 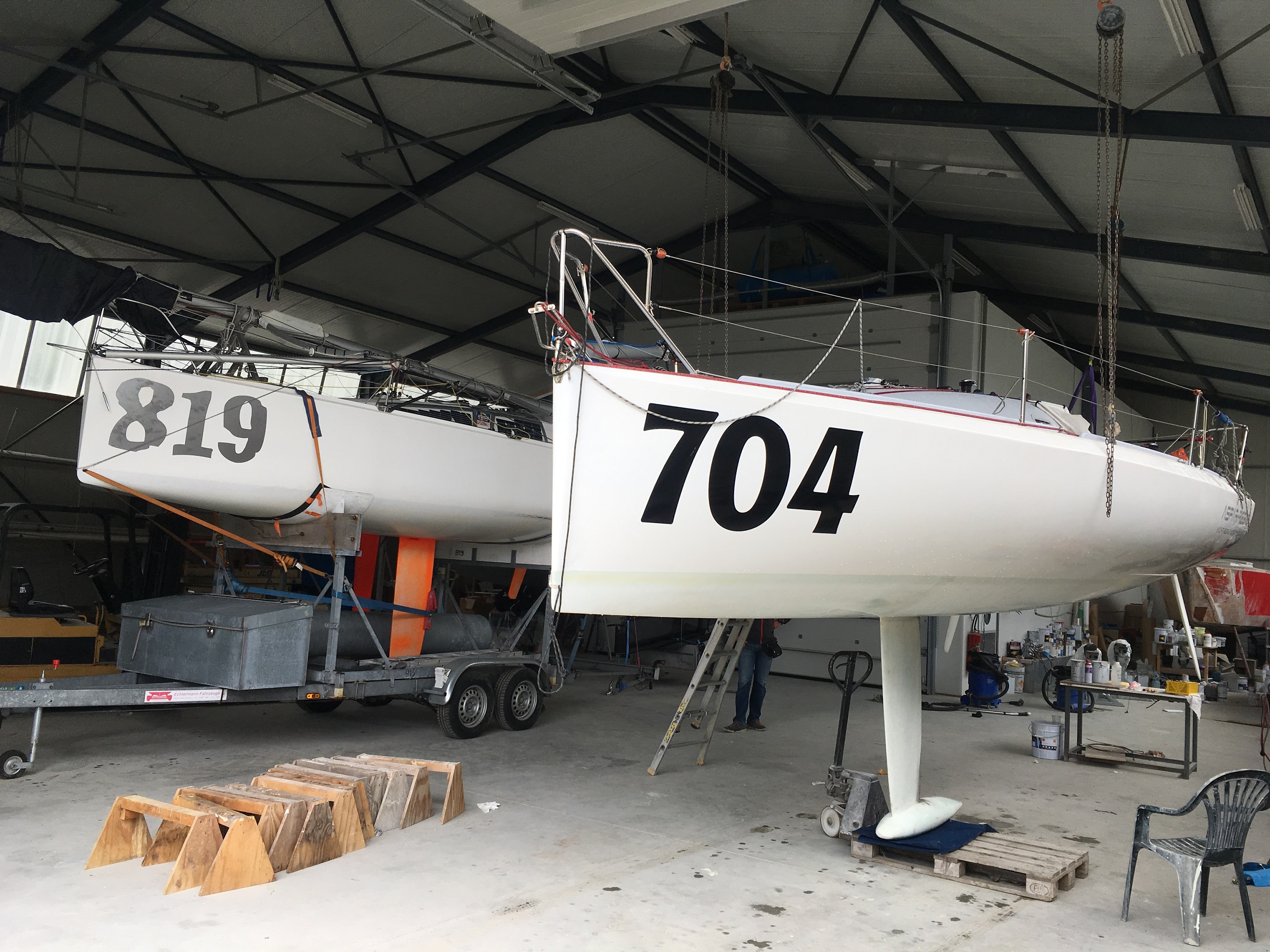 At this moment, Eloa should be nearly ready, tomorrow I will go get her and start the preparation for the Mini Fastnet with the cheerful Darko Hajdinjak.. Cheers!